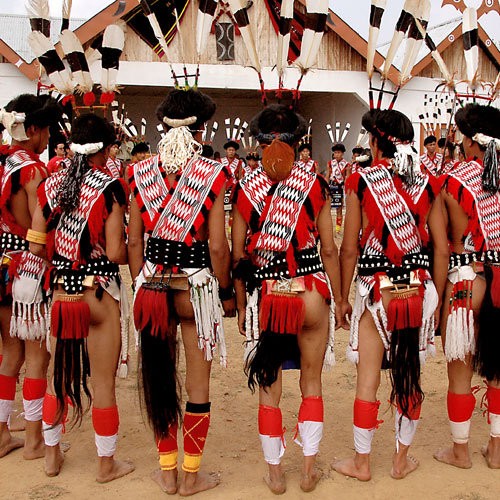 Sekrenyi is the major festival of the Angami. It is a 10 day celebration which signifies purification and sanctification (before going to war).

Two days prior to the main festival firewood is collected. On the next day animals are hunted in preparation for the meal. Next day the main celebration starts.

The males clean the wells outside the village at night in preparation for the first day,  Zukhophe. Only young and pure bachelor boys are allowed to do this work. Next morning, the men go to the well and washe all their bodily parts and then sprinkle the washing water on their clothes and weapons. Then they fetch water from the same well for the women of the household as no one else is allowed to fetch water on that day. On their return from the well, the men each slaughter a chicken.

Young boys are only allowed to join in the Sekrenyi celebrations after they turn 6-7 years of age, and their first slaughter is the cock not a chicken. It is only after their first offering that they are allowed to slaughter a chicken as according to myth 'cock must die in hands, and is then dropped on the ground, if the right leg of the cock comes above the left leg, then it is considered to be a good omen'. The bottom part of the chicken is cut away and the intestines pulled out. On the top of the appendix, feathers are inserted and this is hung at the entrance to their house.

The chicken is cooked in a separate (temporary) oven made of wood away from the household's main kitchen. Before eating the meal, they offer the liver of the chicken along with some wine and pray 'If any enemy comes, give me the strength that I kill the enemy before he kills me'. Women and girls are not allowed to eat from tis meal. Afterwards the men put some water in their mouths and spit it out to mark the day's end. People make local rice beer which they offer it to the spirit of the well and pray that the well never dries up continuing to provide pure water to the village.

Next day people collect wild fruit to decorate their houses particlarly the house of a common ancestor. On the third day they cut bamboos which they fry.

The 4th day is important for the young couples. They go to the jungle and collect corks, stones, wood pieces etc. to make necklaces and bracelets and various other ornaments. There is an exchange of gifts between them as well as between closely related friends. If someone wants a favor or a gift then he or she can ask for it from their friends but they must do something for them in return. By doing so, they are considered to be very close friends.

On the 5th day the young people go to their parents houses and make things such as ornaments, spears, dao and other items which they keep for future use.

The 6th, 7th  days are holidays. On these days people just stay at home and enjoy with friends and family. although in some villages the you men hunt on the 7th day.

On the 8th day is the most significant part of the festival, the  bridge pulling or gate pulling as well as inter village visits

On the last day they cook meat and distribute it amongst the villagers.